Skip to content
Now you will learn to write Minor 2nds using the Notation Tool. 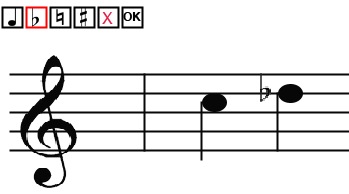 There are many kinds of intervals, such as 2nds, 3rds, 4ths, etc.

The number is called the Degree.

The degree is based on the number of letters from the lowest to the highest note.

The degree is based only on the letters, not whether they are sharp or flat.

While there may be more than one way to write an interval, only one way is correct.

When writing a Minor 2nd, the first way is correct because C to Db is a 2nd.

The second way is incorrect because from C to C# is the same letter, which we call a unison.