As we learned in the previous lesson, intervals are used to measure the distance between two notes.

Intervals are named according to how many steps one must take in the scale to get there.

Fourths, Fifths, and Octaves are generally called Perfect because of their pure sound.

All other intervals are called Major if they line up with the Major Scale, or Minor if they are one half step smaller than the interval found in the major scale.

Here is the general rule that describes how to name all such intervals:

Intervals which are very sharp are called “augmented”.

Intervals which are very flat are called “diminished”.

Major intervals or perfect intervals become “augmented” if a sharp is added.

Minor intervals or perfect intervals become “diminished” if a flat is added. 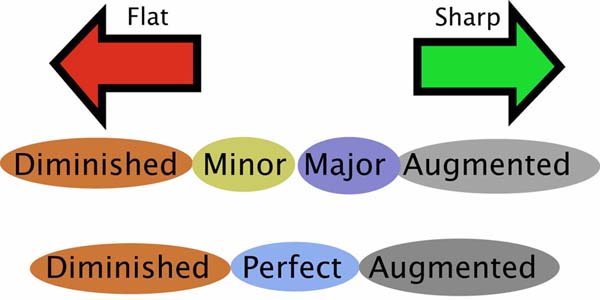 For comparison, here is a table showing all the intervals, how many half steps they contain, and any alternate names they may have.